On the 20th anniversary of the September 11, 2001, terrorist attacks, our nation once again enters moments of reflection.  Where are We, the People of the United States, today?  Where are the nations of the world today?

As much as I hate to say it, this anniversary, the Islamic terrorists of the world are celebrating, as are all the enemies of this nation.  Last year at this time, I wrote about the horror of seeing a nation whose cities were burning in the fires of riots, whose monuments of great Americans past were being desecrated and destroyed, whose police officers and fire fighters were being assaulted; where even in my children’s schools, teachers actively engaged in disrespect of the American flag as well as encouraged rebellion against anything that is pro-American, where the teachers, principals and school districts were peddling the 1619 project and Critical Race Theory with unquestioned dogmatism, and any dissent against any of these terrors was viciously attacked by the political left and their ANTIFA and BLM thugs.

College students are trained to become “liberal snowflakes” who have no common sense and cannot make an honest judgment about anything, lest they be attacked as “racists” or some other leftist pejorative while demanding that the government pay for every whim and fancy that comes from the cesspool of hell that is the Heart of Sin, or as Joseph Conrad put it, the Heart of Darkness.  And all this while comedians and Hollywood personalities decry the assertion of freedom and liberty by those who will not be put under another mask or vaccine mandate.  (According to one fellow most known for being a killing machine called the Terminator, and who used to be the former governor of California: “Screw your freedoms!”)

Perhaps the Biden Administration would like to explain on behalf of the Democrats and liberals they represent today how the policies and the practices of the Taliban, Al Qaida, and Isis became the way of life in America twenty years after 9/11.  Biden and his regime are the only ones who cannot see that America is an international joke, as the American military now specializes in ‘diversity training’ and Critical Race Theory, and as American embassies fly the LGBTQ rainbow flag (and the BLM flag) – does he not know that the terrorists are not only laughing at him, but they are beginning to mobilize again?

This morning, there was a memorial service in Shanksville, Pennsylvania, where United Flight 93 crashed after the passengers in the flight rushed the terrorists who had hijacked the plane.  Former President George W. Bush was there to speak.  I must say that I voted twice for President Bush when he ran for president, and I do not regret that decision as he was 100 times better and more qualified than the two Democrat contenders in the 2000 and 2004 elections.  But that said, I was appalled at some of his comments yesterday, or rather, the way that pundits interpreted them.  (I honestly do not know what the former President intended for he was intentionally vague.)  But since there is an obvious animosity between the Bush family and President Donald Trump, I can understand why many pundits say that he was targeting the “January 6 insurrectionists”.  In his comments, he equated the Al Qaida terrorists (and the other terrorist groups) whom this country has been fighting for the last 20 years with “domestic terrorists” – according to the pundits, this meant the people who protested and are protesting the last election.  They “desecrated” national institutions and monuments to liberty; he could just as easily have been talking about the ANTIFA and BLM rioters who destroyed several cities last year, attacked innocent people at restaurants, tried to attack the White House, and pulled down and destroyed dozens of monuments all throughout the country, but no, apparently that was not “domestic terrorism”.  That’s the terrorism that CNN and most of the media called “mostly peaceful protests”. And they celebrated the mob who attacked the Secret Service who were protecting the White House, hoping that they would get close to attacking President Trump, but apparently, that is not terrorism.

President Bush’s comments, whether intentional or not, definitely struck a nerve with many people in this nation, and in particular, regarding a woman named Ashli Babbitt, the woman who was shot to death inside the Capitol on January 6, the only fatality that was a result of direct violence (the rest of the victims died of health issues such as strokes or heart attacks).  Unlike the 9/11 terrorist attacks, the January 6 incident, though unfortunate, is not so cut-and-dry.  The hundreds of thousands of people who gathered there were protesting the obvious fraud in the last Presidential Election, and this moment was their last chance to be heard.  That there was foul play by people INSIDE THE GOVERNMENT is beyond a shadow of a doubt (the capitol police purposely opened the security gates and invited people to the steps of the capitol), but those details are almost certainly not going to see the light of day unless by a miracle of God.

Ashli Babbitt was not a radical fringe person.  She deserved to be heard.  She was an American citizen who had an honest concern about the corruption that permeates the federal government.  At the age of 17, she asked her parents to sign a waiver so that she could join the United States Air Force and defend this country in the War on Terror.  She did 8 tours of duty between 2003 and 2020 in both Iraq and Afghanistan, before she was honorably discharged.  And yet, as one social media person said today, “her former Commander and Chief equated her with the Taliban today”. If this is true, I hope President Bush will read this article and call the Babbitt family and explain to them why their daughter who was unarmed that day when she was shot in the Capitol is equal to the terrorists she and hundreds of thousands servicemen fought against the last 20 years.

Before I wrote this article, I had a chance to look back at some of the articles that I wrote for 9/11 all the way back to 2001.  My God, the words and the images haunted me!  In 2001, Maranatha Herald (the magazine which was the first media endeavor of Maranatha Full Gospel Church) released a special commemorative edition based on the terrible events of that day.  It was the age before everything went digital and the sophistication of the technology at our disposal was limited.  But it was well worth it just to capture that moment in time.  We did not have money for color pictures, but the black and white imagery has an artistic and aesthetic message in and of itself.  One image that was included in the articles one still shakes me so many years later.  The picture is a side profile of the Statue of Liberty in New York harbor against the backdrop of the smoldering destruction of the World Trade Center.  The picture is striking in color.  It is absolutely stunning.  The Statue of Liberty is made of copper and because of decades of sea air has been turned green, and it’s still very beautiful.  But as said before, we did not have the money for color printing, so quite literally by accident, we ended putting up the black and white picture.  I cried when I first saw it. The backdrop for this picture is almost completely black, but the Statue of Liberty is bright white. 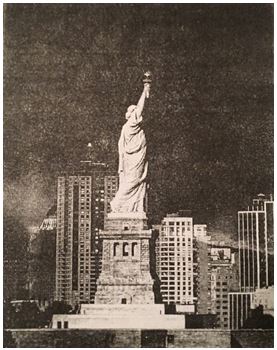 It is an image which I think best describes not just the last 20 years, but especially today.  In a world filled with the blackness of evil, liberty and truth and the goodness of the Bible still stand in stark contrast to that evil.  The liberty that we experience, which the statue symbolizes, will never be subject to subjective interpretation or misrepresentation.  And no matter how dark the evils of the times are or how widespread that evil maybe, at the end it is only smoke that will be blown away with the winds of time, the wind that the prophet Daniel saw which will ultimately lead to the coming of God’s Kingdom from heaven when Jesus Christ will reign forever and ever, Amen.

For all who are questioning the reasons for the last 20 years; if you are disillusioned with everything today, please remember that no matter which direction the politicians in government go, that idea of liberty will stand because it comes from God Almighty.  Follow Him for He will surely triumph.  He will wipe away every tear from our eyes and all our sorrows from our hearts.  And if you endure, one day you will reign with Him.