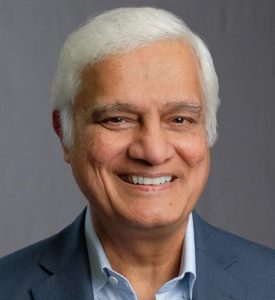 To Reverend Ravi Zacharias and Family and RZIM

It is with great sorrow that we heard about your sickness and the prognosis of it, this last week.  As believers in Jesus Christ, we do not believe in the idea of Fate but rather of Faith. We do not give up! Our lives are in God’s hand till the last minute, one way or the other. But as you have put so eloquently so many times, we are human beings subject to human weakness, and the fears and other emotions that King Solomon talked about in Ecclesiastes 12 can play havoc with our minds, especially during a time of such sickness. But as the Apostle Paul said to the churches, we always end up looking to the Cross and to our Lord who suffered and died for us on it.

It goes without saying (and I am sure that you have received many messages from people about it) that you are one of the best speakers of the Gospel in our time. Your prime forum may have been in academia but only God knows how much you became the terror of those of the secular/liberal world, who liked to portray Christians (especially Christian preachers) as illiterate, illogical, uneducated country bumpkins-something that has never been true; but the perception was widely carried in the press.

Prior to my joining the ministry twenty years ago, my undergraduate degree was in Radio, Television, and Film. I learned in time that the “powers that be” had deep angst against Christianity, one they often portrayed in media. Furthermore, many Christians failed to understand the tricks of the devil. They would shout and scream Bible verses, but couldn’t answer the skepticism, cynicism, and falsehoods supposedly from “science” peddled in university settings. Seemingly, we (I speak of Christians in general) were intimidated by the philosophy of the world and the “Goliaths” from such institutions as Oxford, Cambridge, Harvard and Yale, who had multiple doctoral degrees and a lot of media attention for their grand pronouncements on atheism, Islam, or whatever other idea they were passing. You and your ministry changed that. Youth ministries on college campuses went through a revolution that brought many souls to Jesus Christ by challenging the conventional thought of the modern day; yet not out of obnoxiousness, but rather with love.

You have written well, and spoken well. But for me personally, as a preacher of the Gospel, there is another reason for which I appreciate you very much. No, I could never do what you do, as much as I love watching your speeches and reading your books-I am not a Christian Apologist (I fall asleep when I read the first page of philosophy, other than C.S. Lewis!). I am a preacher; I preach from church pulpits or small crusade stages in the mission field. But these two points unites us more than anything despite the differences in our backgrounds or scope of ministry. You once said that you have never charged an honorarium to go and preach the Gospel anywhere. There was never a prerequisite in terms of money to any venue or group. If it was possible for you to get there, and your schedule permitted it, you would get there. I have never forgotten that point. The second point was that you communicated in English eloquently, but you had enough consideration for your audience to know when translation was needed and therefore never hesitated to having it when it was needed.

Both of these points come from humility. It is what made you go all over the world and kept you busy 300 days in a year despite inconveniences to family. My father and you are just two years apart in age. Like you, he came to the United States from India (from the state of Kerala) during the early 1970s. He has been in ministry these last 45 years. He (as well as I) is Pentecostal, and the type of ministry done was different than yours, but his mindset is no different on these two points. And being my senior pastor, I learned these two points from him first. But for many years I thought he was alone in these principles; you have no idea how I rejoiced when I heard it from you, too!

God gave you gifts and His anointing, and you never hesitated to freely give what He gave to you. Souls were saved. Lives were changed. The dynamics of christian ministry changed in many places, and others have taken up the call of your ministry.

When it came out in the press that you were sick with cancer, I immediately remembered Nabeel Quereshi. “We wrestle not against flesh and blood…” Paul wrote in Ephesians. That is the reality of true ministry: it will always be spiritual. I want you, your family, and all the people in your ministry to know that we have been praying for you daily throughout these many years for this reason. I said I remembered Nabeel because in the aftermath of his death, many Muslims said he died because of the wrath of their god against “the infidel”. But their diatribe was misplaced. We may die, but it is the Holy Spirit that continues to move, and in the words of General William T. Sherman, they might as well have “appealed to a hurricane!” Nothing will stop the move of God.

I wish that we had a chance to meet, and if it is God’s will, we will. But if not, brother Ravi, please know that we love you very much. As the son of immigrants from India, we appreciate you and your ministry for Jesus Christ. On behalf of Pastor Bethel P. Jacob-my father, and Senior Pastor of Maranatha Full Gospel Church-and our family, may God bless you and your family and RZIM.

In Service of the King of Kings,